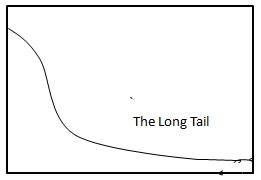 In modern times,enterprises have had business models that have been heavily influenced by the law of Disproportionate Results—the 80/20 rule.  In the world of brick-and-mortar, 80% of results were traditionally derived from only 20% of the activity—sales, inventory, paperwork, jobs, space, etc.  Management’s job involved constant diligence to eliminate low yield or nonproductive activities.  Unfortunately that often meant a decline in service and a slow but relentless movement toward sameness.  It was as Toffler had predicted a world of unlimited choices—all the same.  You can have anything you want as long as it is within the 20% of alternatives that 80% of the population wants.

The 80/20 rule is still important when dealing in tangibles but something important has happened.  No longer does the 80/20 rule dominate.  It is called the Long Tail, and it is the new dog on the block.  In the digital world, the right side, or tail end, of the bell-shaped normal curve goes to infinity without ever reaching zero.  When the cost of maintaining inventory, handling transactions, and distributing products or services drops to near zero, the Long Tail of the bell curve becomes as rewarding as its center—the center that used to account for 80% of all activity.  Today you can have any song, any book, and any video—even though they, long ago, became no longer economically feasible to keep on store shelves.

Today’s excellent businesses look for opportunities to operate in the Long Tail while being mindful of the 80/20 rule in other aspects of their business.  Nor does one's product or service have to be digital to gain some of the benefits of the Long Tail.  The key is to reduce the cost of maintaining inventory, handling transactions, and distributing the product or service.  When these cost are reduced, the Long Tail benefits become realizable.

When it comes to sustaining their financial success, we have seen printer manufacturers shift their emphasis from hardware sales to the profitable revenues produced by selling the ink used by that hardware.  The ink has low inventory and distribution cost when compared to those costs for the hardware.  We see coffee services shift from relying on the profitability of the coffeemakers to the revenues produced by selling the coffee used by the coffeemakers—the coffee having a lower inventory and distribution cost.  Excellence companies look for ways to capitalize on the Long Tail while being considerate of the 80/20 rule.


###
Join me January 22, 2013 for a glass of claret.  I will be at Parnassus Book Store in Nashville signing the new hard cover edition of my novel, The Claret Murders. In keeping with the main character’s reputation as an epicurean, there will be also be caviar to go with your wine. We will have a lively discussion, some readings and prizes--one of those will be a thirty year old claret from my private cellar, a 1982 Chateau Sociando-Mallet.