Creating Something Out of Nothing

It has been a few years since I first read Kevin O’Connor’s book, The Map of Innovation, about creating something out of nothing. Kevin is not just anyone. By the time he wrote The Map of Innovation, he had already founded three successful companies and was working on the next two. I know him best as the founder of DoubleClick as the dot-com industry erupted on the world economy. DoubleClick has since been acquired, but it is still the technology behind those targeted ads on the Internet.

While it sounds elementary, O’Connor says something very profound in this book. He writes:

All businesses, no matter what business you are in, really boil down to answering three questions:
Kevin’s book is about his process for answering those questions. It is about how to generate ideas and select the right ones to pursue for success and wealth. He calls his process BPT or Brainstorming Prioritization Technique. My son Stephen, the CEO of Bazaarvoice and previously the chief financial and technology officer at DoubleClick, uses a variation on BPT. I have used my own approach developed independently over the years under the umbrella of The Language of Excellence. I refer to my approach as the “Consensus Process” but the process is similar to BPT and the objectives are the same.

Here is Kevin’s BPT checklist:
I use a simple visual model for the Consensus Process: 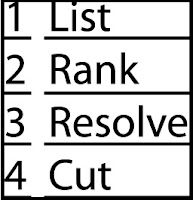 O’Connor’s book was published in 2003 and print copies are still available, but your best bet to get this powerful tool for creating something out of nothing is to download the $14.99 Kindle version from Amazon.

There is a caveat. When writing about strategic planning, I always emphasize that the only sound “plan” is a plan to change the “plan.” Objectives and goals are merely temporary targets based on inaccurate assumptions. So planning is a continuous process. With that in mind, you have to keep asking O’Connor’s three questions repeatedly to get it right. You have to keep refining your answers based on new knowledge, changes in the environment in which you operate, and new assumptions about the future. How well you answer the three questions will determine the degree of your success.

I will be joining authors Stacy Allen, Chester Campbell, and Lane Stone on Friday, August 23, 2013, to discuss how available everyday technology, including the smart phone, helps and hinders the fictional modern-day sleuth. The Killer Nashville session is scheduled for 2:00 pm. In my book The Claret Murders, the 2010 flood is used to confound the central character’s usual access to technology.

Controlling is one of the duties of a leader, but controls can go too far.  The excellent leader guards against the tendency of controls to accumulate with negative consequences. 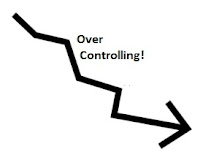 Businesses are plagued by cause-and-effect fallacies—because we do certain things, certain things happen.  Sales contests are one example. Does it produce an increase in sales or just move revenues from one period to another? Controls are another.

Systems, policies, and procedures tend to accumulate, stifling performance. The excellent leader systematically subjects the organization’s activities to “so what” and “if what” questioning. They are diligent about eliminating and simplifying. They understand that activity, “work,” creates work. They first place priority on effectiveness, “doing the right thing,” but second they look for efficiency, “doing things right,” and in most cases that means simplifying and eliminating. Steve Jobs was relentless. His focus on simplifying and eliminating was notorious to the point that he eliminated the "on" and "off" button from devices. It is unnecessary he said; the device knows when it is not being used, and it knows when you start to use it. So why bother?

It is Nashville, a history-making flood, a beautiful attorney, a deadly secret, and wine to kill for--The Claret Murders, the latest Mark Rollins mystery adventure by author Tom Collins

It is begenning to look at lot like 2010 all over again!

The Claret Murders is fictional story (a mystery) that takes place during the big Nashville flood.  Was that the flood of 2010 or is it 2013?
Mysteries by Tom Collins include Mark Rollins’ New Career, Mark Rollins and the Rainmaker, Mark Rollins and the Puppeteer and the newest, The Claret Murders. For signed copies go to http://store.markrollinsadventures.com. Print and ebook editions are available from Amazon, Barnes & Noble and other online bookstores. The ebook edition for the iPad is available through Apple iTunes' iBookstore.
Posted by Unknown at 3:41 AM No comments:

The controlling aspect of management is represented by the generally upward movement of the business chart. Controlling implies that the business achieves successive expectations, the Encore.

The Encore is a reality of business. Those who judge us expect successively higher results. Planners and managers must consider this expectation and generally manage to achieve it. It means keeping your powder dry. It means not operating on the razor's edge. It means building elasticity into the business. It means early warning systems and gap planning to make up shortfalls. The ENCORE expectation includes product innovation, customer satisfactions, etc. Thus, the manager must always think, "what do we do for an ENCORE?"

Controlling implies systems that avoid doing the wrong thing and that moves the business toward predetermined objectives through meeting successive expectations—encore after encore. It does the right things and generally does them in the right way.

Control means problem avoidance—putting systems, policies, and procedures in place that minimize problem occurrences. Problem avoidance can be further fostered through delegation. Managers should insist that a good measure of all problems be dealt with as close to the action as possible. A control system starts by setting a standard, then measuring the actual result, and adjusting the standard or actual as required. Excellent managers know the key factors that make their business successful and the key performance indications that tell them when the business is on or off course. They are unabashed believers in the power of goals. Higher goals result in successively higher achievements. They are always out to break records. They understand that every single member of the team impacts customer service and they look for ways to measure and reward individual performance in serving the organization’s customers. I have been blown away by the quality of white glove delivery service from companies like Macy’s department store. Not only do they exercise extraordinary care in delivery and setup, they talk to you as a customer—explain what they are doing. When they leave, they ask you to report to the company. “If you think we did a good job, let our company know.” Why?—because they are being measured and rewarded. They want to do a good job and to be recognized for it.

Posted by Unknown at 4:12 AM No comments: