Psychologists often talk about motivation in terms of Maslow’s hierarchy of needs. 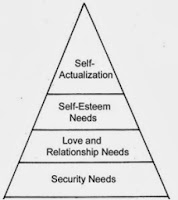 In recent times, the first half of the hierarchy has been largely replaced by the attachment theory. The top of the hierarchy, however, is still relevant for us. When we talk about motivation, we are talking about Self-Esteem, and Self-Actualization. These are the needs that when pursued involve achievement, problem solving, and creativity.

The question is how does Maslow’s hierarchy fit with the assertion in the Language of Excellence that motivation is not externally created—it comes from within. You can hire motivated people, and you can extinguish or discourage motivation (at least temporarily), but you cannot create it in people. While there could be exceptions, they are so rare as to validate the conclusion that in business you cannot change the person. You can, however, change people on your team.

As it turns out, Maslow’s research studied only the healthiest 1% of college students. He also studied what he called exemplary people—people like Albert Einstein, Eleanor Roosevelt, and Frederick Douglass. In other words, Maslow’s pyramid reflects the motivational drivers among level -A people. Like it or not, there are other people who are fully satisfied by fulfilling needs expressed by the lower half of the pyramid.

Since I am not a psychologist I cannot explain why, but I can point to generations of dependence as a common factor among many of the people who are unmotivated to travel into the upper half of the pyramid of needs. There are exceptions, however. There are those who are driven by Self-Actualization needs no matter what their environment. Nevertheless, those living under Communist rule for generations tend to shut the door between the two halves of Maslow’s hierarchy. Likewise, generations of dependence on government welfare seems to extinguish the desire to aspire to levels above satisfying Security and Relationship needs.

The extraordinary thing about some of those who operate at the higher levels is that they appear never to be satisfied with their achievement. They never relax to enjoy their past achievements. These are the true A-level people. Why do some people do what they do? What drives adventurers to start planning their next climb during their decent from a mountain just conquered? What makes the winner at the roulette table risk his or her winnings on the next spin of the wheel? Why would the successful entrepreneur cancel retirement plans to start a new venture? Why did the programmers who created Pong, the first widely successful computer game, sign up for the next project? They are driven to achieve (to win), just to have the opportunity to do it again. They play to play again.
Posted by Unknown at 6:41 AM