Big Government 2500 Years Ago and Today! 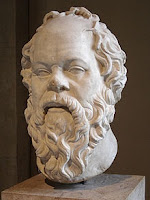 The more things change the more things remain fundamentally the same with respect to the human condition as evidenced by Socrates’s comments defending himself from charges of corrupting the young:

"The State is like a great and noble steed who is tardy in his motions owing to his very size, and requires to be stirred into life. I am that gadfly which God has given the State and all day long and in all places am always fastening upon you, arousing and persuading and reproaching you."

Socrates’s quote appears in Plato’s Apology retelling Socrates’s unsuccessful efforts to defend himself from charges brought by the state.

I was reminded of Socrates’s comments by a November 8, 2015 article in The Tennessean newspaper reporting on the misguided attempts of the City of Franklin Tennessee to intimidate what the city called environmental gadflies.

Present 2015 political currents evidence that the problems inherent with big government continue to this day. Big government (in Socrates’s time it was Athens) is not only “tardy in its motions”; the untended negative consequences of its actions often far outnumber its accomplishments.

Our country was created to be different—to be a country of the people and for the people. But, given time Jerry Pournell’s The Iron Law of Bureaucracy proves inviolable. The fact that the inmates have taken control is the only explanation for the chaos in our policies, lack of policies, actions and inactions.

Is government broken? Yep! How do we fix it?  The only effective treatment for “tardy motions” is a smaller more agile and attentive government. It was true almost 2500 years ago and it is true today.

# # #
For signed copies of books by Tom Collins, go to the TomCollinsAuthor.com. Unsigned print and ebook editions are available from Amazon, Barnes & Noble, and other online bookstores. For an audio edition of The Claret Murders go to http://amzn.com/B00IV5ZJEI. Ebook editions are also available through Apple iTunes’ iBooks Store and Smashwords.com.
Published by I-65 North, Inc.