Immigration—It Is Just The Same Old Thing or Is It? 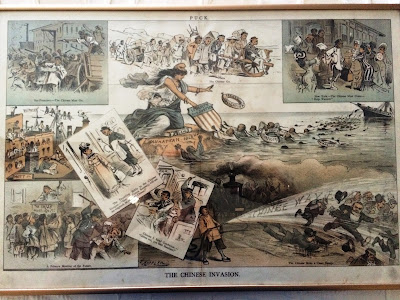 The Puck cartoon pictured above is over 100 years old. Those already here resented each new arriving wave of immigants until they melted into the United States “pot”.  Initially, new immigrats stuck together, and their increasing numbers seemed to threathened our existing culture.  Over time their children and their children’s children spread out into the general population.  Some of their culture, especially their food, became Americanized and  added to the richness of the US. A lot of their old ways were,however,  left behind as the intelopers themself became Americanized.

However, what we are dealing with today is different. We have a large and growing number of undocumented people who stole their way into our country. And they did it at a time of heightened war time security. That is right, we are at war—at war over drugs and with radical religious elements out to do us harm. These undocumented persons are off the grid. We don’t know who they are or where they are.  And the existence of undocumented millions in our midst has become an intolerable risk.

Building a wall will not remove that risk.  At best, it merely keeps the risk from increasing. To eliminate it, we must either remove the illegal people or document them. It seems to me that documenting the undocumented is the logical course.  And, we don’t need to solve the “hotly contested” citizenship issue to do that. Documenting these immigrates is no more complicated than issuing a driver’s license.

We can provide illegals already here with a renewable work permit along with a Non-U.S. Citizen ID Card provided they meet certain conditions and register before a specified dead- line. Registration has to include securing identifying information including finger prints, photo and personal history. The permit would terminate if  the required conditions are violated -- for example, a subsequent felony conviction. This documentation process provides no path to citizenship; nor does it prevent providing one at some future time.

Those who fail to register or fail the requirments for registration must be taken into custody and deported when they surface, and they will.

There are many who feel that doing the above will simply stimulate a fresh flood of illegal immigration. That is why a majority of US citizens wanted the border problem solved first. Unfortunately, the risk of not knowing who they are and where they are has grown to great to wait.