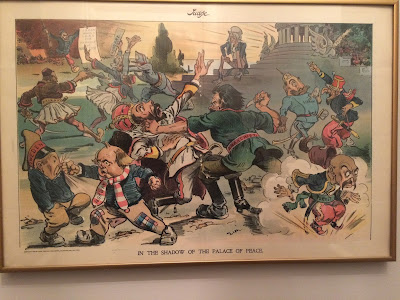 This cartoon was drawn 112 years ago. The clothes we wear has changed more than national behaviors, and the cartoon is missing the new Goliath on the world stage—the Middle East and radical Islam.
World peace seems as illusive today as it did 1904 when the cartoonist depicted a helpless Uncle Sam that did little more than sat on the side lines watching the squabbles between nations, while he wished for world peace. Back then, we enjoyed the isolation- of oceans protecting the USA from nationalistic ambitions of adversaries. We could take sides and go to war, but war couldn’t effectively reach the U.S. homeland.
No more! Wishing for world peace won’t cut it. Nuclear and space age weapons, global communications, air travel, cross boarder commerce, and porous borders have bridged our ocean moats.

###
For signed copies of books by Tom Collins, go to the TomCollinsAuthor.com. Unsigned print and ebook editions are available from Amazon, Barnes & Noble, and other online bookstores. For an audio edition of The Claret Murders go to http://amzn.com/B00IV5ZJEI. Ebook editions are also available through Apple iTunes’ iBooks Store and Smashwords.com.
Published by I-65 North, Inc.