We said goodbye to Earline Rogers, a.k.a. Aunt Enie.  Actually, she wasn’t legally my aunt; she was everybody’s aunt. She passed away several months ago at 97 on April 1 4th, 2016.  On August 22nd at the Woman’s Club of Nashville, we celebrated her life—a life wonderful for everyone who knew her—a life of giving that will continue because she set up a trust to provide college scholarships for generations to come.

Aunt Enie will be remembered by all walks of life in the Nashville and Centerville area including her Juris, Inc. friends.

Aunt Enie was an honorary member of the Juris, Inc. team complete with logo jacket and a Juris business card with the title Official Executive Guest Chef and Expert Biscuit Maker.  For years Aunt Enie and Lee Ann’s Herron’s mother prepared a Christmas time breakfast-lunch for the Juris home office team members—Country Ham, Grits, Eggs and Aunt Enie’s Biscuits—with all the fixings.  If you were one of those Juris team members, you remember those world famous biscuits.  She left behind her recipe so that you can continue that Christmas tradition: 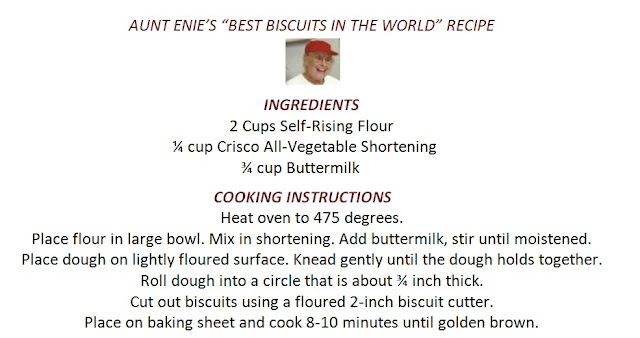 I can’t possibly detail all the credits she accumulated during her life, but let me remind you of just a few. Known for her unfailing smile, everyone she met became a friend. She was widely traveled. As a senior citizen she was a government courier for top secret documents. In her seventies, she went Heli-hiking in mountain terrain. She entertained sick children as a clown. She loved bridge and often played at what he called her second home, the Women’s Club. She was at home anywhere with anyone, but she always retained a little air of country about her. She became a lady of means and a generous one. As one family member said, “Aunt Enie believed in keeping money circulating.” She did and she enjoyed it!