2016 Christmas Wine—Tasting or Science? Maybe Both!

Christmas isn’t over, but we decided to open our Christmas bottles early. We actually opened two bottles. The first was a 1982 Chateau Cheval Blanc, a widely hailed great vintage from the Saint-Emilion 1st Grand Cru Classe house of the white horse. This bottle has been in my loving care since its release. There can be no issue of cellar abuse. I had wanted to save this great vintage for a very special occasion, but I could no longer ignore reports of its seeming decline. It was open it now or never experience it’s greatness. Alas, I was a bit too late. The 1982 was a wonderful drinkable wine that went superbly well with the fat rich rare prime New York strip streaks. But Cheval Blanc needed the food! It lacked the stand alone character that would make you just want to enjoy the wine—maybe with a little cheese or pâté.  Its fruits had faded when opened but rebounded after about an hour in the decanter; nevertheless, the 1982 bottle could have been any really good drinkable wine, maybe even a pinot or ,of course it’s true colors, a merlot.  “If you have them, smoke them.” There no reason to keep this any longer. It is not going to get any better. 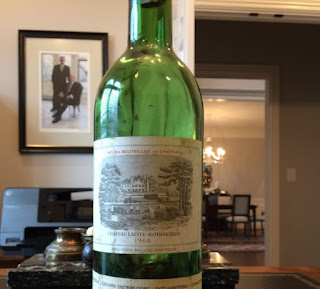 The next bottle was an antique—a fifty year old Chateau Lafite Rothschild that had lived a questionable cellar life, at least from its outward appearance. Now this was interesting.  There is no question than the wine is well past its prime, but it still had a character all its own.  Unlike the 1982 that you just wanted to enjoy with the steak. You kept wanting to go back to the Lafite for another sip—another taste. What is the wine telling me now?  Some time old wine is more like a science experiment and maybe the Lafite was near that edge.  When first opened, you questioned its drinkability. Then things started to happen—but it was not the fruit, color, or nose of a young wine.  It was dried flowers. It was the taste of and nose of autumn.  Where the 1982 needed the food, the 1966 added something else to it but didn’t really need the food. It wasn’t part of the menu; the wine stood alone.  It was not a wine to drink—it was a wine to sip. The ‘66 Lafite was a wine to be taken in small doses with amble resting time between those taste. You wanted to observe its evolution once freed from its fifty-year imprisonment.

***
It is the next day and as you would expect there is nothing left of the 1982 Cheval Blanc, but there is still a little of the Lafite in the carafe, and I just repeated the experiment—another sip. The color was and still is very light-darker than a Rose but bourbon like. The point being that it’s color  has faded with age.  The taste is old but no tannins; it is leather and dried flowers—a walk in the woods.  But you know I still want another sip.  As for the 1982, I have done that and checked it off the list. However, I would love to try another ‘66 Lafite, just to see if that other bottle, maybe treated with better care, is any different. I’ll remember the ’66, and that is the difference character makes. It is unique. It is memorable. Where the 1982 gave you all its answers; left you with no questions. The ‘66 just may still be hiding something that another bottle might answer.

# # #
For signed copies of books by Tom Collins, go to the TomCollinsAuthor.com. Unsigned print and ebook editions are available from Amazon, Barnes & Noble, and other online bookstores. For an audio edition of The Claret Murders go to http://amzn.com/B00IV5ZJEI. Ebook editions are also available through Apple iTunes’ iBooks Store and Smashwords.com.