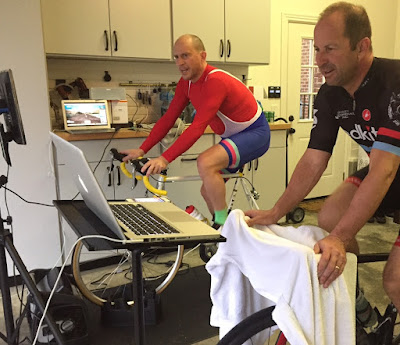 It was raining on Christmas Eve in Franklin, Tennessee. My son (50- year-old son) is a committed competitive cyclist and recovering from a detached retina. You would think it is a good time to put another log on the fire and just enjoy the season.  But noooooo!

I’m reminded of the motivation difference between a hen and a pig. The hen is motivated and involved producing her egg on cue without complaint. But the pig—now providing you with the bacon to go with that egg requires real commitment. A true cyclist is a commitment, and rain, sleet, snow, or injury is not going to keep them off the road.

Just to prove it, unable to ride in the inclement weather and with one bad eye—son, Stephen, and his pal, Dave, have gone virtual.  They are in my garage in Franklin running a real race against real people but in a virtual world.  Believe me the grunts, the sweat, and the pain are all real.

Not only are the people they are racing real, they are racing in real time – they are really there on the bike run, yet they could be doing so from locations in France, Germany, Austin, Napa Valley, Austria, England, etc. Technology has collected them and deposited them in a competitive race in a virtual world where each is out to outdo the other or conspiring with a partner to beat the other by forming friendly teams. Some of the places they race are fictitious, but others are places they have raced before and know well including familiar routes of the Tour de France.